Welcome to part 2 of our gelato and frozen yoghurt hunt. This time, we went around looking for popular gelato places to sample. 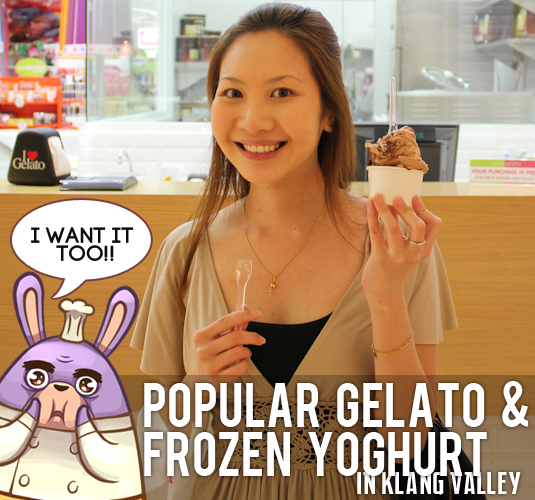 Our first stop was Cielo Dolci in Paradigm Mall. 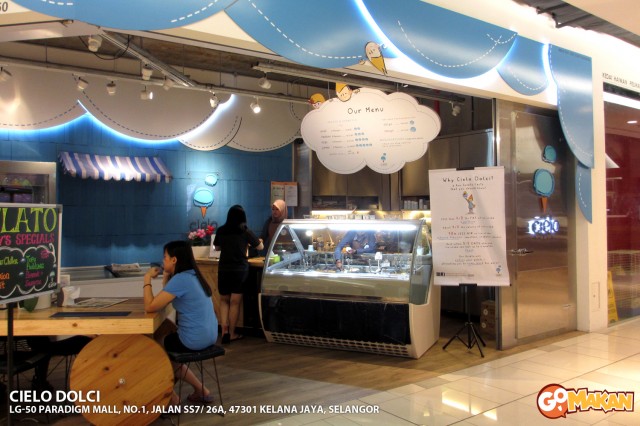 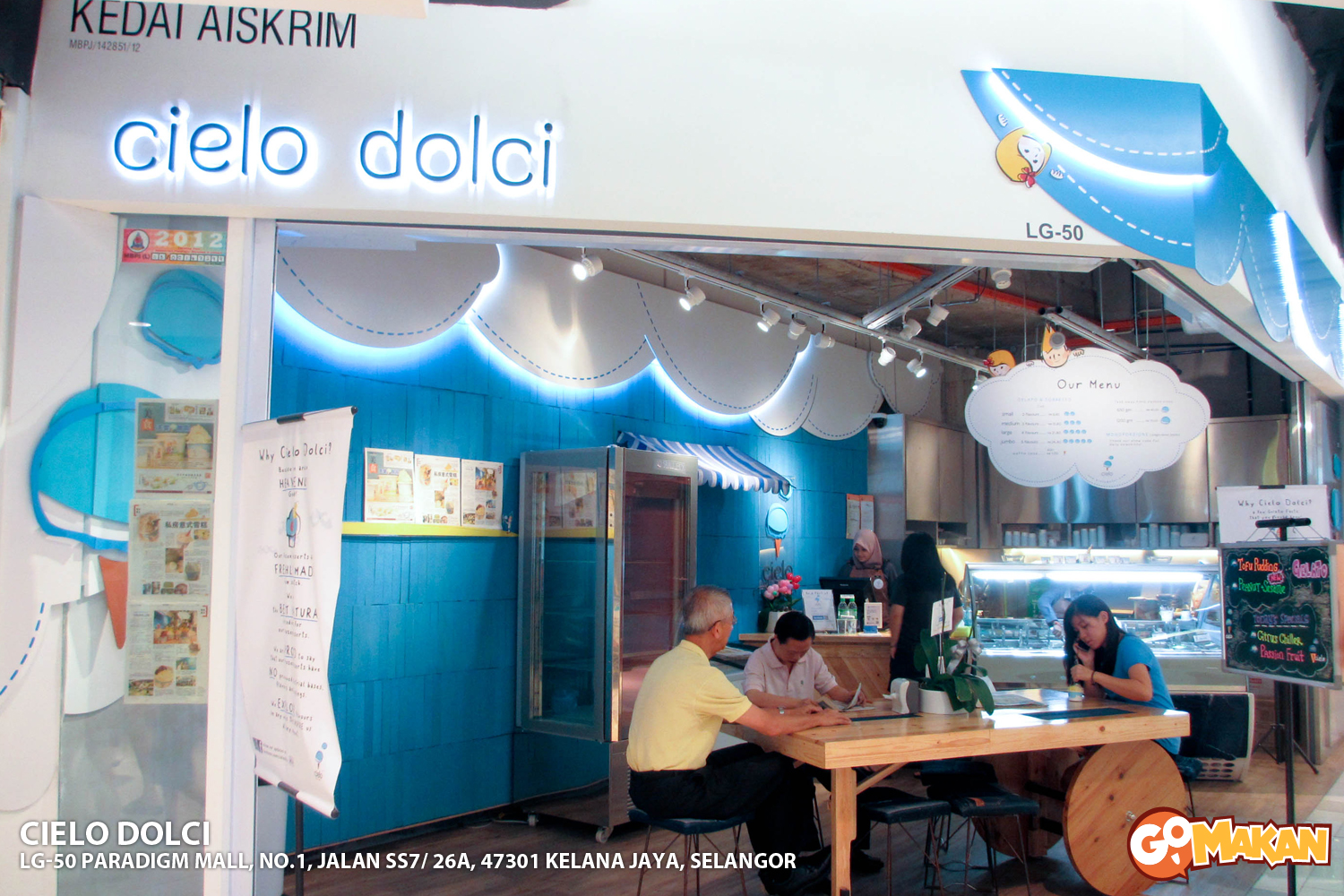 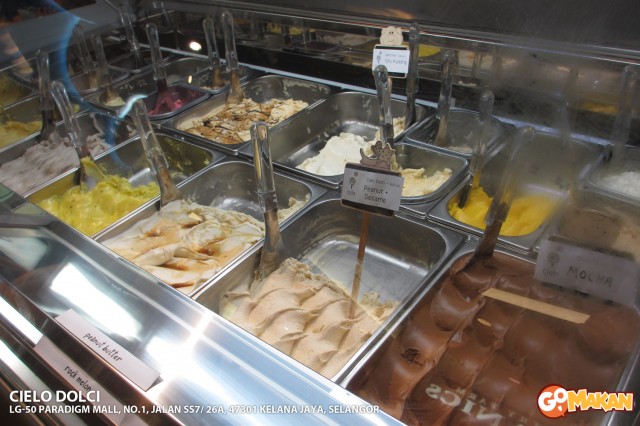 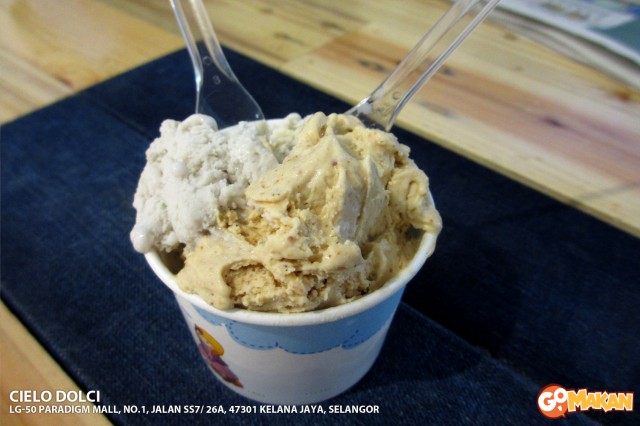 I picked hazelnut and banana/mint.

To be honest, was not really impressed with Cielo Dolci’s gelato. It didn’t have the rich taste and flavour that gelato’s supposed to have. They also don’t have a great selection of flavours, and to top it off, it was pretty pricey.

Next, we visited Freezy Freezy; also in Paradigm Mall. 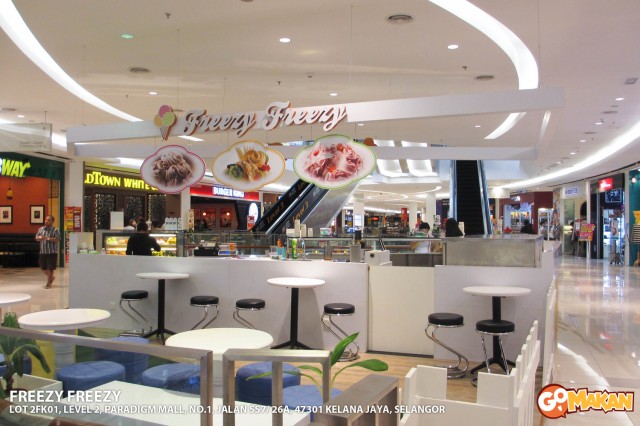 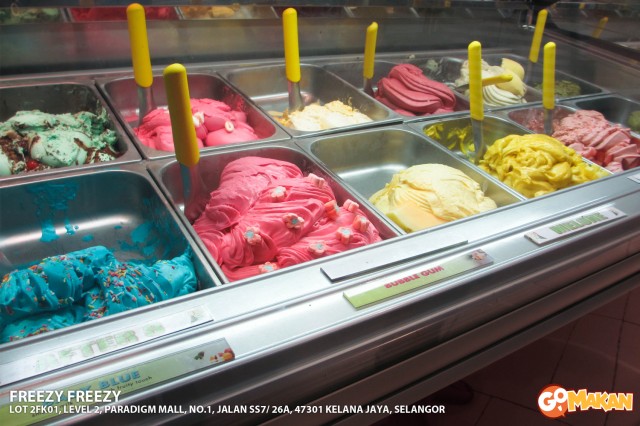 Their sorbet flavours (they have both gelato and sorbet). 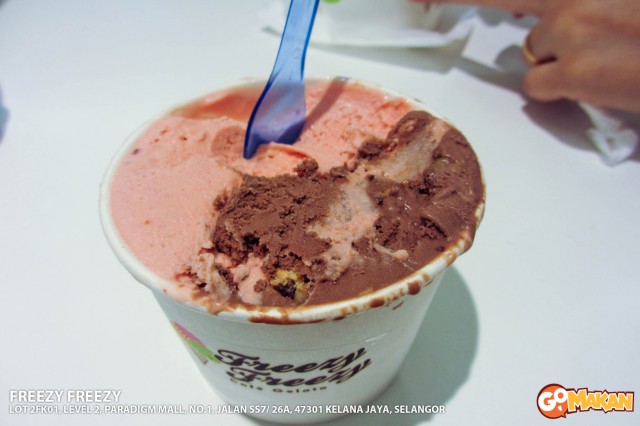 I got the strawberry yoghurt and Ferrero Rocher flavours. This is what I REALLY like about Freezy Freezy. They sell the gelato by weight, and the cups are a measurement for the servers to get the amounts right. So they pack the gelato up nicely and then weigh them. In addition, their gelato was YUMMY! 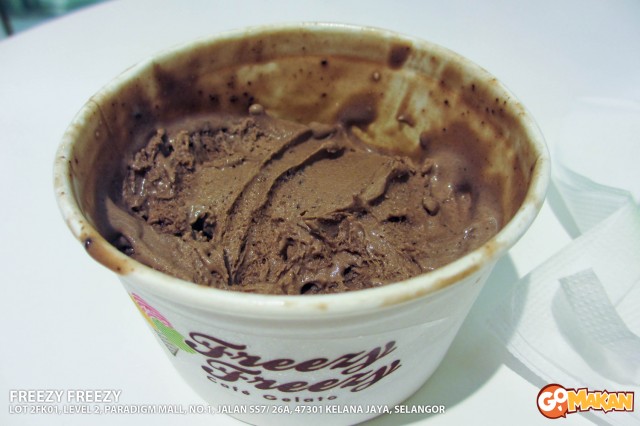 They also serve durian flavour—I’m not a fan of durian, but I have some friends and family whom have tried it before and say that it’s excellent. So, if you’re a durian lover, be sure to check out Freezy Freezy’s durian flavoured gelato!

Third stop in our gelato hunting quest was Loco Gelato in 1 Utama: 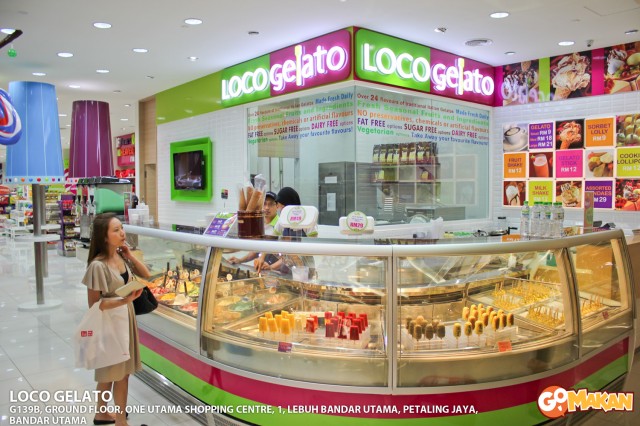 Loco Gelato, ground floor, opposite Isetan. What was interesting about this place was that they had gelato on sticks! Yup, just like popsicles. 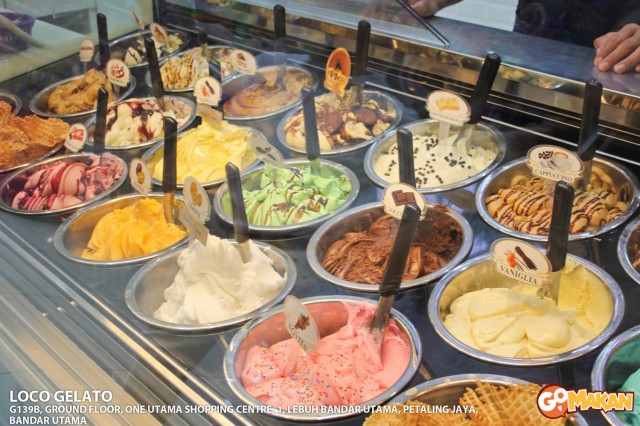 Plenty of flavours to choose from. 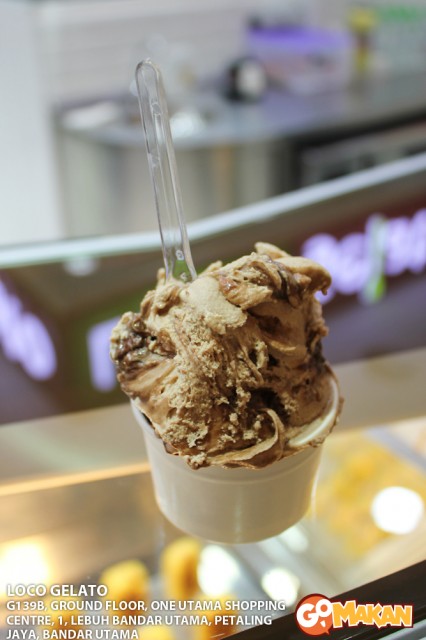 Got some hazelnut and caramel gelato.

The verdict? Absolutely delicious! Also, they were VERY generous with their portions. I ordered a small cup but the gelato was towering over the edge of the cup. It was tasty, rich, and of very good quality in general. To top it off, it cost less than all the other places! Definitely going to come back here and grab their stick gelato next time, just to try it out.

Next, we went to Gelato Fruity, also in 1 Utama. 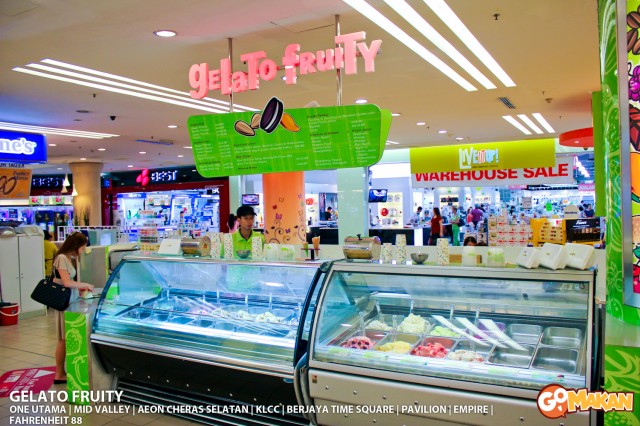 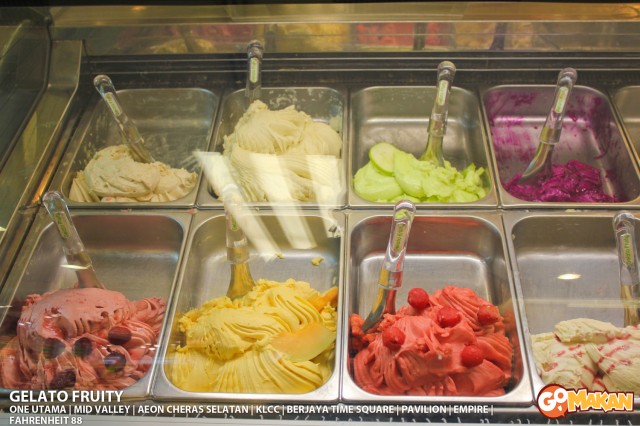 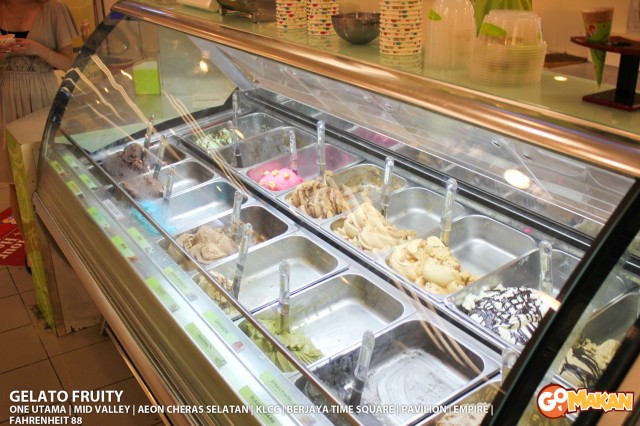 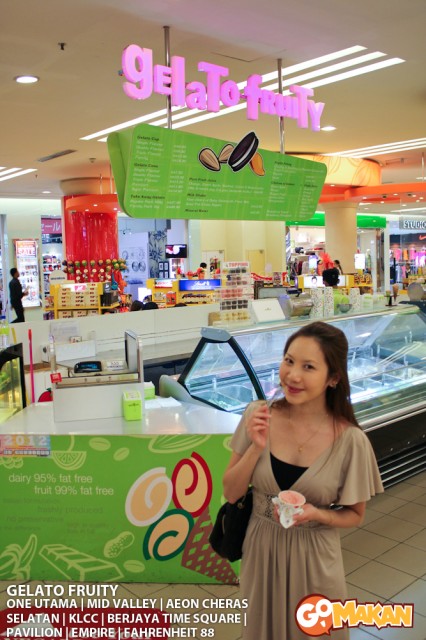 Me and my gelato! 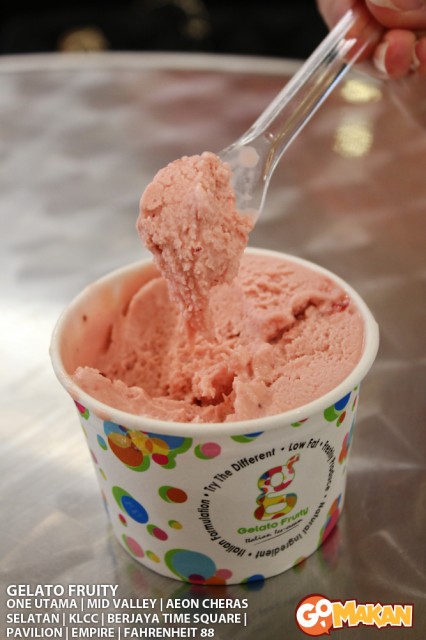 I decided to be boring and stick to a boring flavour—strawberry.

The gelato here was okay, not bad, but not really amazing either. I wondered if it was because the gelato might’ve been sitting to long already? If you look at the pictures, it looks like almost everything has been sold out (or was close to it, anyway).

Lastly, we went somewhere that isn’t gelato nor frozen yoghurt, but they do market themselves as a healthy, low-fat premium ice cream place. New Zealand Natural is famed for not using any colouring or preservatives in their ice cream. They also serve frozen yoghurt, and sorbet, but probably not in Malaysia as I haven’t seen those around. 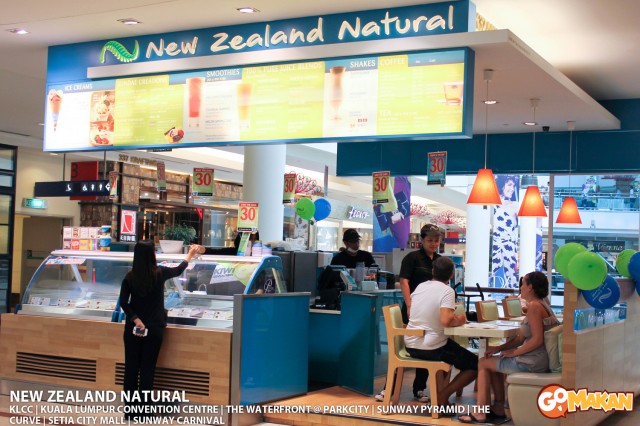 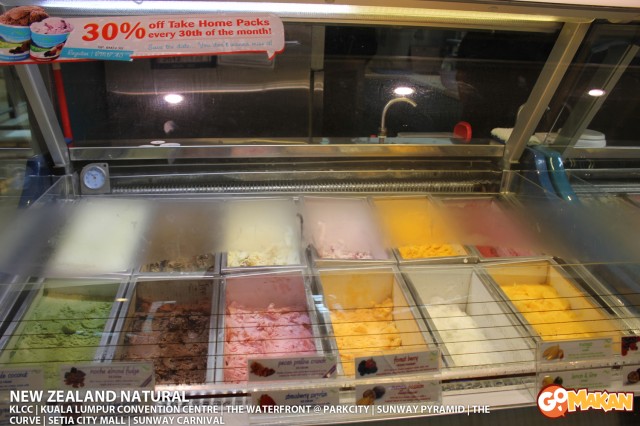 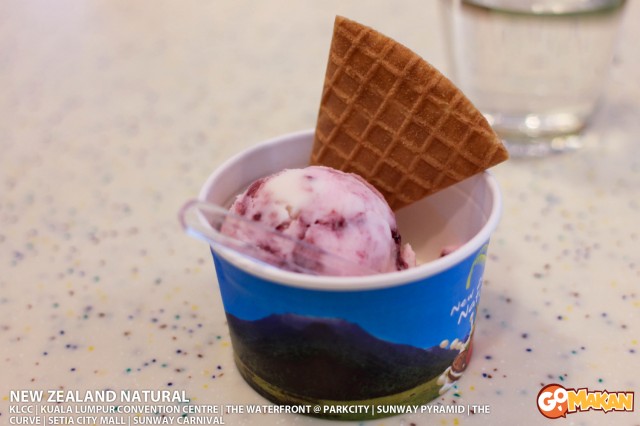 Have to comment that not only do their ice creams taste great; they have just top-notch customer service. Their servers brought me a glass of water without me even asking for it, and they refused to let me throw out my empty cup, insisting that they would do it. If there’s anything about an eatery that makes it one step above the rest, it is most definitely GOOD service.

So there you have it, our full review of some popular gelato and frozen yoghurt joints in Klang Valley!