One of the most popular desserts in Malaysia is Cendol. It is a traditional dessert that has been sweeping the nation off its feet since the beginning for decades. Cendol originated in Southeast Asia, and was made popular in Malaysia, Indonesia, Myanmar, Singapore, Vietnam and Thailand. This popular dessert creates a strong fan base wherever it goes—be it around the suburban areas or in the middle of the concrete jungle, Cendol has always been the top choice for a cooling-off during hot days. 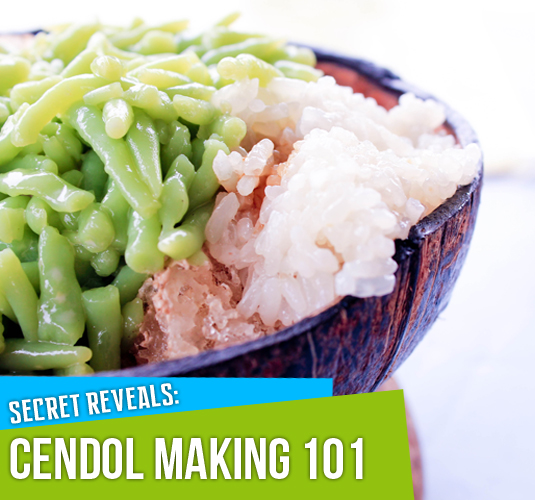 Known far and wide as one of the ultimate sweet and cold desserts, nobody really knows how the green jelly is made. Well, as Gomakaners, we set out to get a behind the scenes look at one of the top Cendol makers around, James Cendol in Old Klang Road, to learn and perhaps, dig some secrets about on how cendol is made.

So, on a hot sunny day, we went to James Cendol and the co-owner was kind enough to escort us to the back of the breezy restaurant and to satisfy our hunger for Cendol-making knowledge.

With a pen, paper and a camera, Ming Chien and I set off to “Cendol Making 101”.

The workers started off with all the required tools to make Cendol. These tools comprised of a huge pan, a rower, a huge pot with tiny holes at the bottom, two buckets, and a round block.

Patience is key while blending the mixture. It needs proper blending so that the mixture can be dissolved smoothly, leaving no bubbles.

After a thorough blend, the mixture is poured into a huge pan. The pan needs to be at a suitable temperature to avoid the mixture getting burned up once it touches the plate.

If the pan is properly heated up, you can see that the mixture sits well and cooks evenly. An important thing is to make sure that there are no bubbles or air inside the mixture. This is to avoid air getting into the jelly, which makes the Cendol appear dewy.

The heat control varies form one Cendol maker to the next. The closer the fire to the pan, the more intense pressure is given to the mixture. Therefore, close attention is need during the stirring process. 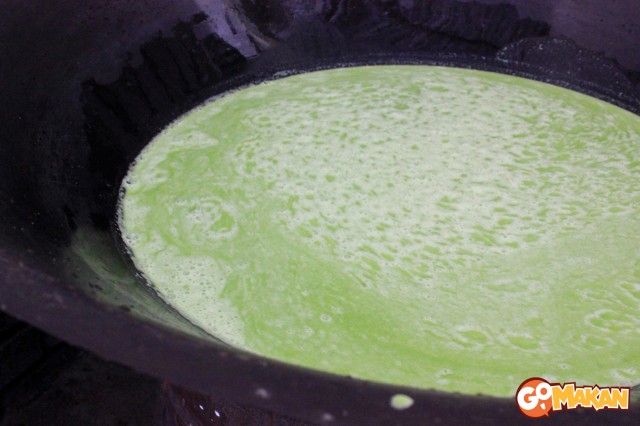 A closer look at the heated Cendol mixture.

Here comes, shall I say, the best part?

She had to stir the mixture non-stop for 45 minutes! 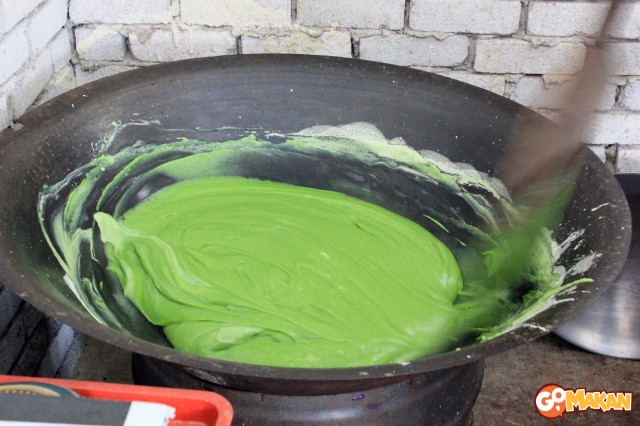 After 45 minutes, mixture is starting to thicken. Go kakak! Go!

However, in between the long, tiring stirring process, the mixture had become dry and a bit too thick, which made it harder to stir. Hence, the worker added more Pandan water to give some it extra moisture and colour to the mixture further.

Replaced and continued by a new chef.

As you can see from the picture, the perfectly blended mixture looks shiny and not sticky. The texture has to be soft, sturdy and rich in Pandan colour, according to the chef.

The Pandan blend is left to cool for a while as the workers started to prepare the tools for the next process, which was to create the Cendol and cut them into lots of tiny pieces. The workers took a large pot which had holes at the bottom and placed it above a basin filled with cold water. 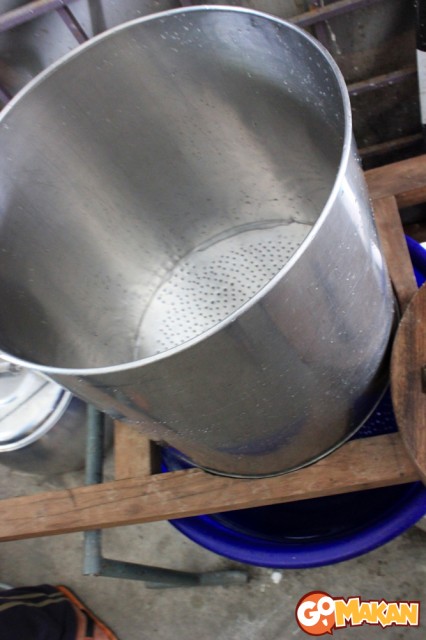 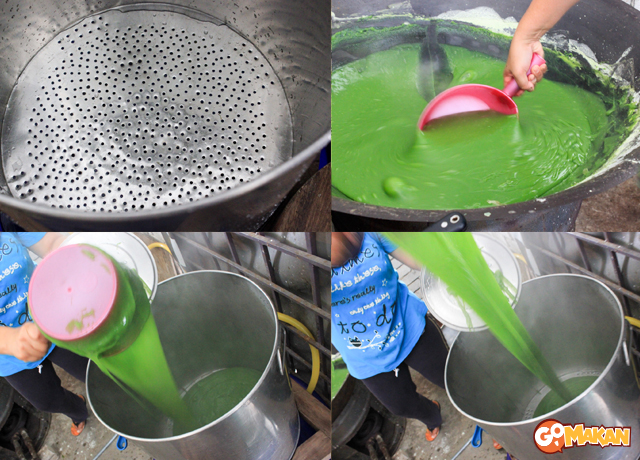 Pour it gently into the huge pot.

Look at that Cendol jelly. It just slips out from the holes in the pot so fast that it looks like raindrops. We are officially amazed by this!

A huge, round and heavy block is place on top of the remaining jelly. Then, it is pressed down really hard so that everything goes through the holes and nothing gets wasted. 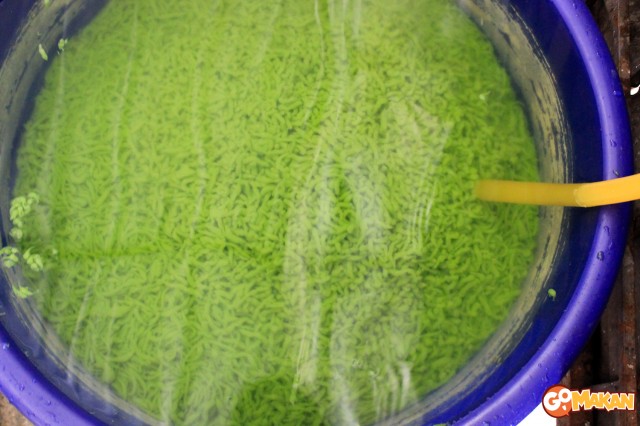 Once everything is done, the pandan jelly is cooled in cold water. It now looks like what you see in the bowl when you order a bowl of Cendol. Short, green, and worm-like in shape! The jelly is left to sit in the cold water for a couple of hours.

The chef stirs the contents from time to time so that everything doesn’t stick together. 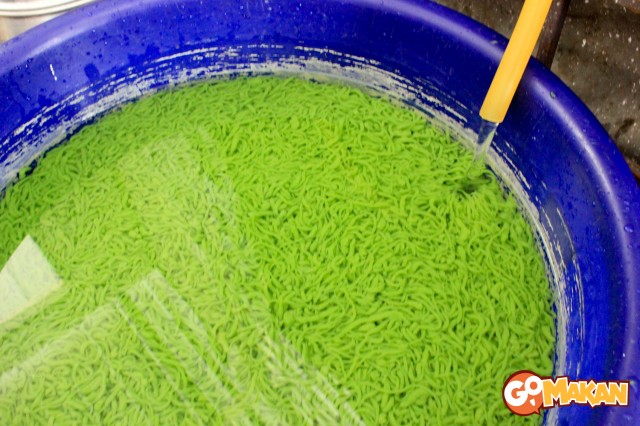 Onto part two—how they cook the red beans that’s the other ingredient in cendol. 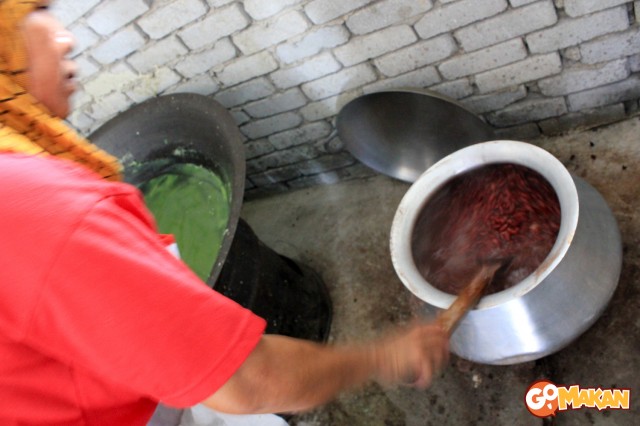 The red beans are placed into a medium-sized pot and cooked on medium heat. It takes roughly about 2-3 hours before it is ready. The beans are mixed with water and some salts, refined sugars and edible chalk.

The red beans are said to be ready if they have grown a bit in size, look springier and are dark maroon in colour.

Well, now everything is good to go; grab yourself a bowl, scoop some Cendol, crushed ice, red beans, Pulut, and pour in the Gula Melaka. And there you have it! A delicious bowl of Cendol. 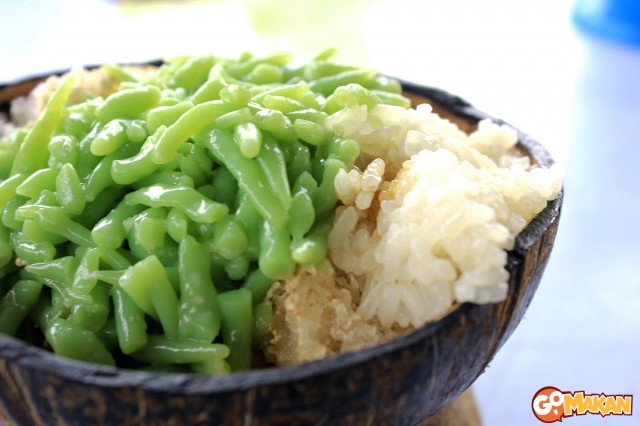 Special Thanks to James Cendol!

GoMakan would like to extend a special thanks for James Cendol to take the time to show us how they make their super delicious Cendol.

Love Cendol? Tried James Cendol before? Tell us what it was like in the comments or better yet support Jame Cendol by writing a review on their gomakan page!